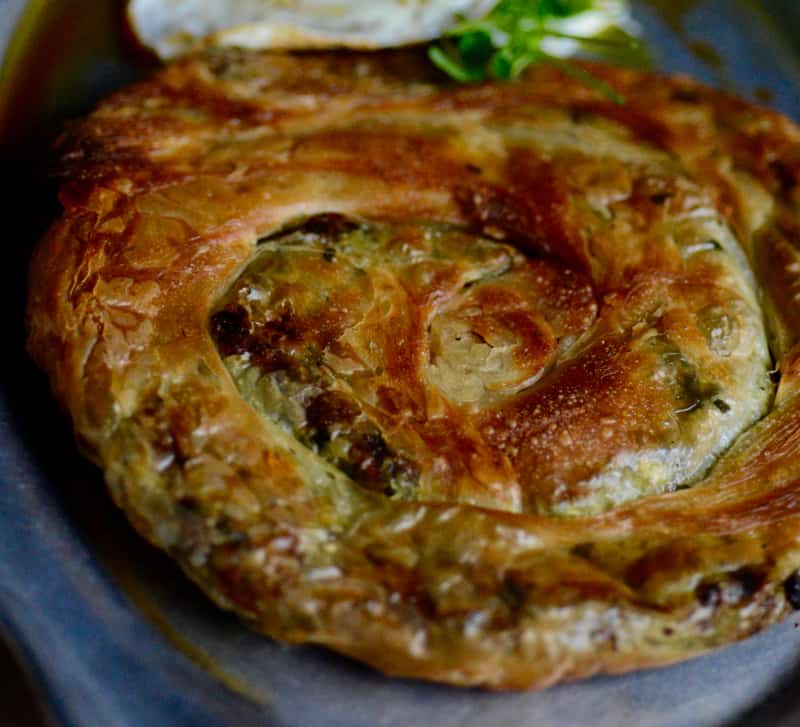 Borek is a very popular dish and with good reason. It has withstood the test of time. Originating during the Middle Ages, Borek is still something that you can find on the streets of Azerbaijan, as well as countries in Eastern Europe, the Mediterranean, and the Middle East.

This dish has many variations. At its core, it is a pastry filled with whatever one can imagine and can take on many different shapes. In fact, many different regions have their own specific special recipes for Borek, being either savory or sweet.

Here at Cafe 21, our take on Borek is twofold and depends on what you are in the mood for. Stuffed with either turkey or wilted greens, this dish is served with our seasonal chopped salad and sumac. Chef Leyla’s homemade dough is hand tossed – making it the freshest possible. It can be found on our All Day Menu, which means that its’ readily available from open to close!

Now if you are curious about the shape, our Borek is served twisted!  The Turkic root word bur- means ‘to twist’ so now you are in our little secret behind the shape and well, you can say that you speak a bit of Turkish now too!

The history of Borek is just as twisted. Just look it up and you will see what we are saying. It is noted as being created by the Turks of Central Asia before their westward migration to Anatolia in the late Middle Ages or could possibly be a descendent of a pre-existing Eastern Roman (Byzantine) Anatolian dish.

Regardless of its twisted and long history, we do know one thing: Borek is loved, so hop on over to Nature’s Kitchen and get a taste of it for yourself!